Friday was my least eventful day of the week, mostly because I ended up spending too much of it fighting with computers -- first my desktop, which has an awesome replacement keyboard but decided that I wanted adaptive screen lighting no matter how many times I turned it off and kept dimming my screen, refusing to let me use the hardware buttons to brighten it again, then my old laptop, which has decided that it's own power cord is not a Dell power cord and keeps demanding that I get it one. (It will use my new Dell power cord, so it's definitely a cord issue, not a laptop issue.) It was pretty hot, at least, so I didn't mind spending a lot of the day indoors.

We had dinner with my parents, came home and watched some baseball and college football, then I put on A Simple Favor, which was quite enjoyable and not predictable -- every time I thought I knew where it was going, Anna Kendrick's character would say something like, "Are you trying to Diabolique me?", which is both funny and a pointed comment on expectations of women in film noir (this one starts out meeting one set of expectations, then does a big amazing flip, and while I wouldn't call it a feminist masterpiece, it doesn't offer good-and-evil judgement on women who make some very unconventional sexual choices). Around Baltimore's harbor earlier this month: 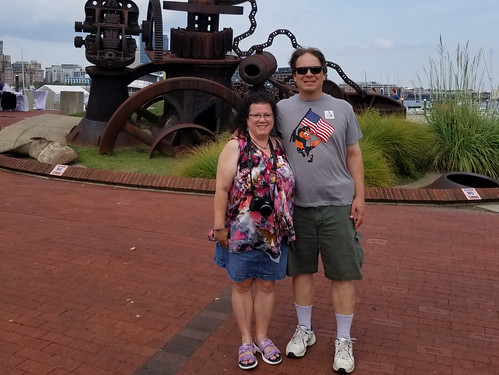