Despite Hurricane Dorian, I am at the beach! We weren't positive last night that the storm wouldn't turn and make the Chesapeake Bay Bridge unsafe, but although we had drizzle most of the day and high winds in Delaware, the storm impact here is mostly high surf and more-dangerous-than-normal riptides. So I have not been in the Atlantic higher than my knees, though by the time we got to the shore, after dinner at Warren's Station across the street from our hotel, it was in the mid-60s and the water was magnificent, warmer than the air and churning foam far up the sand. There were a few sandpipers and a couple of gulls, but we haven't seen a single crab -- they must have dug down to stay out of the storm.

The town was hosting a parade for wounded veterans, so there were people lining the streets waving flags as we drove in and soon after fire trucks and police with their sirens on to escort the buses of warrior families. Some of the shops (at least the ones that are open, because after Labor Day, a lot of the town closes except on weekends) are also doing fundraisers for Dorian victims to the south. Because we are geniuses, we managed to forget our beach towels, so we had to stop at Sunsations, which has a lot of summer beach stuff on sale and thankfully also has sweatshirts, because 65 degrees feels cooler blowing off the ocean than standing in the sun. It's weird being here with so few kids around! 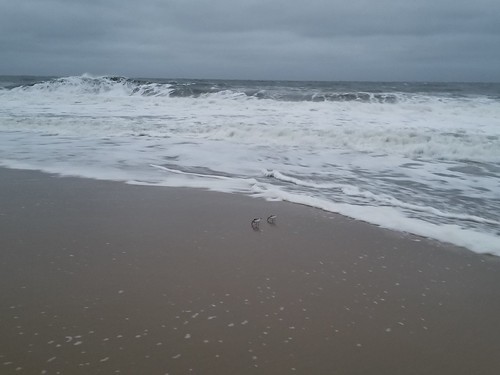