We had a pretty much perfect day in Fenwick Island, though the beach had rough waves and riptide warnings so there was no one swimming when we first arrived in the morning under cloudless skies. That changed as it warmed up, though the waves were some of the biggest we've seen in Delaware and the only horseshoe or blue crabs we've seen this trip were deceased ones thrown onto the sand by the hurricane. We spent a couple of hours on the beach, came back to the hotel for sandwiches, then went to the DiscoverSea Museum and the Seaside Country Store before heading to Viking Golf for my annual mini golf loss while distracted by Thor.

We had traditional beachside Kohr Brothers frozen custard and went to the beach for a while in the late afternoon, water still rough though I think the riptide warnings ended tonight, replaced by high water warnings for the bay and creeks, which were indeed up over their banks when we drove to Grotto Pizza for dinner. There was a glorious sunset that we stopped to see over Little Assawoman Bay at Fenwick Island State Park before we came back to the beach near our hotel to look for ghost crabs. Now we're eating fudge from the Seaside Country Store and watching the college football wrap-up, since it was a good day for the Terps! 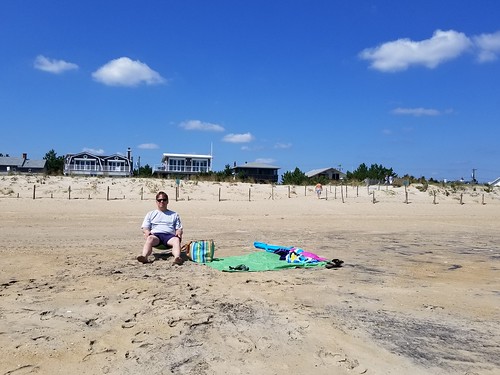