After a morning on the beach -- with smaller waves and warmer weather than the previous day, bringing plenty of sandpipers and hundreds of sand crabs, where I shredded a flip flop -- we went to Rehoboth for lunch and some sightseeing. We got healthy food like Thrasher's french fries, Nic-o-bolis, salt water taffy, and whoopie pies. But don't worry, I got plenty of exercise playing Skee Ball at Funland and running away from gulls who wanted to steal my fries. Plus I got to look in lots of tacky beach clothes and jewelry stores! 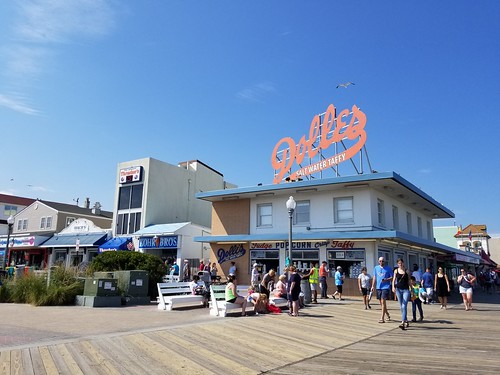 In the late afternoon, we came back to Fenwick Island to go to the beach, came inside to catch up on the late football scores -- good day for the Ravens, terrible one for DC though there are plenty of Eagles fans happy in Delaware, and older son was glad Seattle won -- then went back out to look for ghost crabs, which were once again plentiful after dark. We were still pretty full from eating all afternoon, so we nibbled for a late dinner while watching the Patriots beat the Steelers. On Monday after a bit more beach, we'll be home, woe!
Collapse