Saturday was a little warmer and sticker than Friday but still quite nice, so after an early brunch, we went to the colonial market fair at Mount Vernon, where we heard sailor songs and bagpipes, watched a magic show, listened to General Washington answer questions about his career (he had complaints about Congressional budgets and refused to speak about his role as spymaster), saw ice cream being made, bought homemade soap, looked at lots of glass and pottery, witnessed a skirmish between the Continental and British militias, and ate bread and cheese sandwiches. Most of the animals weren't on the farm because of cannons, but we walked down to the river, too. 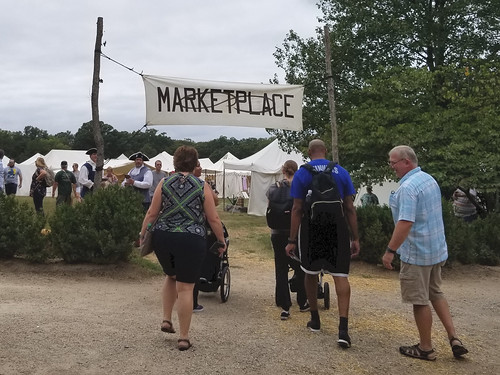 As often happens when we go to Mount Vernon, we got in the mood for peanut soup -- the first time I ever had it was at the restaurant there -- so we stopped to get a few things at the Bethesda Co-op, then came home for soup, cheese, and appples with almond croissants we bought from the boulangerie at the fair. The Terrapins score was depressing and Florida's quarterback had a horrible leg injury, which was all the football news I needed, so instead we watched Booksmart, which felt oddly dated to me -- very reminiscent of high school movies from when I was in high school, and utterly focused on white girls, though at least girls were at the center of the story.
Collapse