Apart from a Mewtwo raid at Locust Grove followed by a walk around the nature center with frogs and chipmunks, my Monday was not at all exciting. Paul is sleeping in a medical facility because he is doing a sleep study, and now that my kids live on the west coast, this is the first time I am staying completely alone in this house (apart from four cats who are far more distressed about this than I am -- they were convinced they would not get their nighttime meal because he usually gives it to them).

So I have been watching Crazy Rich Asians, What a Girl Wants, and other things he would not want to sit through again since turning off the baseball game he had on before he left, and Kate and I had been discussing the size of our action figure collections, and although she has some far nicer items than I do -- I don't get anything that costs much more than $10 -- I do have an appalling number of Marvel Norse gods, so without further ado (and please don't click if you don't like Marvel or Norse gods): 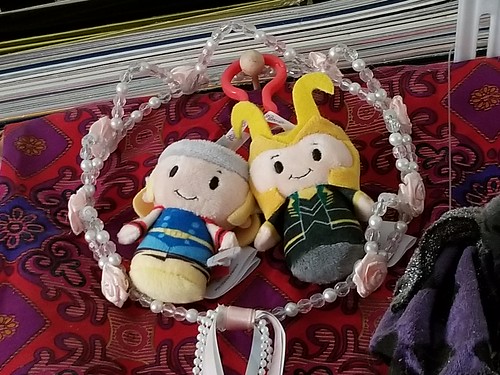