We are home and I am practically too angry to type -- it was a crappy afternoon at the airport, with a multiple-hour flight delay which is somewhat understandable (apparently a passenger safety issue on the inbound flight) and a 50-minute wait from the start of the security line to getting our IDs checked (apparently an incompetency issue as I have never been in an airport as awful every single time as SeaTac). Then at midnight, our CBS, ABC, and CW channels went dark, which Verizon claims loftily is to protect viewers from their having to raise costs to us because the channel providers are too expensive, but they did the same thing just last January and I know how much Verizon's execs make and I call bullshit on all sides.

At least we had a nice morning: Daniel did not need to be at work till afternoon, so we had breakfast together (at a Burger King because it was convenient, so now I know they serve Impossible Burgers for breakfast, which turned out to be a better option than the soggy egg sandwiches). Then we went to Seahurst Park, which we have visited before flying home pretty much every time we've been to Seattle, since it has a beach on Puget Sound with seagulls, crabs, and once again I saw a seal head pop up in the water! Daniel came with us to drop off the rental car, then walked through the SeaTac garage to take the light rail back to the city while we got into the endless security line. We even got a view of Mount Rainier as we drove from the city to the park! 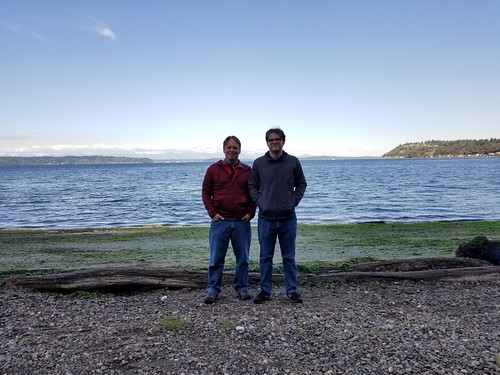