Autumn got lost on Wednesday and it was ridiculously hot for October, which did not make me want to be outdoors. So I spent a lot of time on the phone screaming at a credit card company that was trying to charge me a late fee for a bill that wasn't yet late and things like that. I think that in my rage at Verizon the other night, I forgot to mention that our flight had run out of snack boxes by the time they got to us because they never restocked the return flight, and we watched All Is True, which is well-acted but the most depressing movie about Shakespeare possible, with no trace of his magic wit and sense of joy.

Because it was a Wednesday, there was a Pokemon raid hour before dinnertime, so I did a few Giratina raids (no shinies) nearby with my group. Then we ate and watched this week's The Masked Singer, which despite Jenny McCarthy and Robin Thicke remains huge fun -- I was sure the Panda was Bindi Irwin till I heard her real voice -- followed by the premiere of Almost Family, which tries way too hard to be heartwarming about the daughters entirely at the expense of the mothers, and this week's Stumptown, in which Cobie Smulders is great but there's way too much onscreen violence for me. From Volunteer Park in Seattle, the Dahlia Garden: 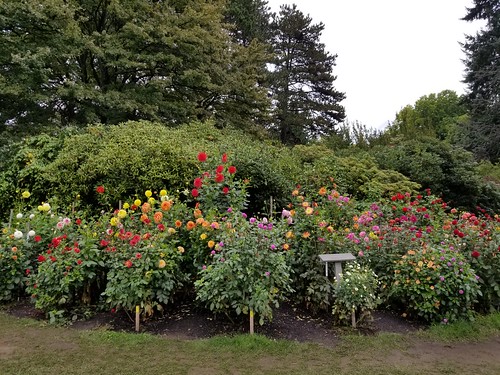