The spectacular fall weather continues -- it was warmer during the day on Thursday, during which I was somewhat slow and sluggish from staying up so late watching the Nationals beat the Dodgers in extra innings, but now it's beautiful and cool and I'd never shut the doors if only my neighbor who smokes wasn't out puffing away on the deck. I went to the park to walk and I stopped by my parents' house with a sewing question, where I saw a mom and two nearly-adult fawns on their neighbor's lawn.

Paul and I went to Giant for cat food and some people food, plus I went to CVS, which ripped me off by refusing to let me use my $4 off $18 hair coupon. My mother had given us a Rosh Hashanah challah with raisins, so Paul made French toast for dinner with that, plus cheesy eggs and veggie bacon. Then we watched the end of the Mystics' championship game, which was very exciting, followed by the Patriots-Giants game, which was less so. Pics of Chestertown's beautiful waterfront last weekend: 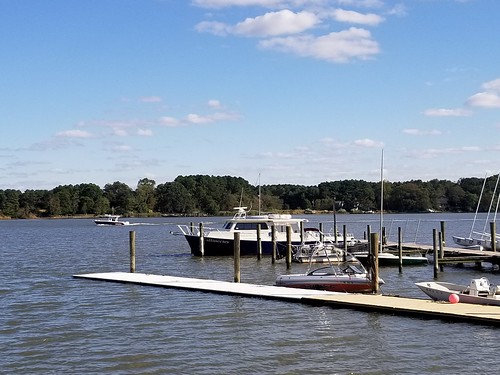