Still staying outside of Philadelphia, where I had a fabulous day with Paul, my college roommate Tracey, and her friend Ceanna, with whom I did a Pokemon raid and everything. We had breakfast together and went to the Philadelphia Museum of Art, where we saw pretty much everything in the extensive European and Asian galleries and had lunch, though we were getting tired by the time we reached the American collection. So we drove to Penn and walked from 34th and Chestnut to 40th and Walnut by way of Locust Walk, which is substantially the same as I remember it although most of the shops along Walnut and Sansom Streets have changed -- certainly the bookstore, now run by Barnes and Noble, though not the New Deck Tavern, where we had dinner. Afterward we swung by Penn's Landing to see the holographic ghost ship, though we couldn't find street parking and the lots were not right nearby and quite expensive, so we settled for viewing it from the car! 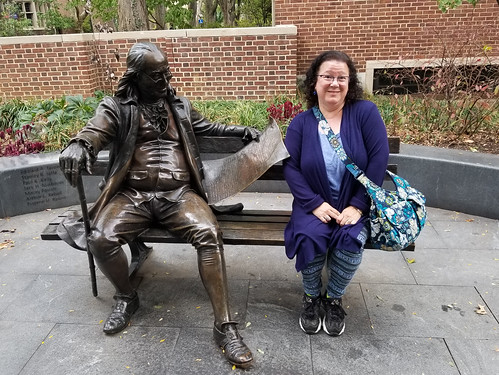