Quickie, have been watching Houston beat the Yankees after a stressful ninth inning -- if the Nationals are fated not to win the World Series, at least I won't have to watch them lose to the Yankees. Earlier we watched some of the Michigan-Penn State football game, but it looked like the Wolverines were going to lose and we'd already watched the sad spectacle of Maryland fail to come back against Indiana. In between, we caught up on Supergirl and Emergence, so that was lots of woman power to balance the sports, particularly the latter which is turning into a sort of Westworld-lite domestic drama (I'm waiting for Emily to be what Piper is, and on the former, WTF LENA!). Plus we went to Giant to get provisions for the week and cat treats.

Earlier we went downtown to the National Postal Museum, which was hosting the North American branch of the Royal Philatelic Society's 150th anniversary celebration, whose theme was George VI's 1939 visit to Washington, DC (they went through Union Station across the street, where we parked). George VI and FDR were both stamp collectors, but most of what I learned was about other historical stuff, like how mail got out of British WWII internment camps for Italians and how Persia taxed all postcards because they had to be inspected to make sure they displayed no pornographic images. The exhibit was in a small space packed with collectors who outclass any comic nerds I have encountered in their knowledge of minutiae like color variation! 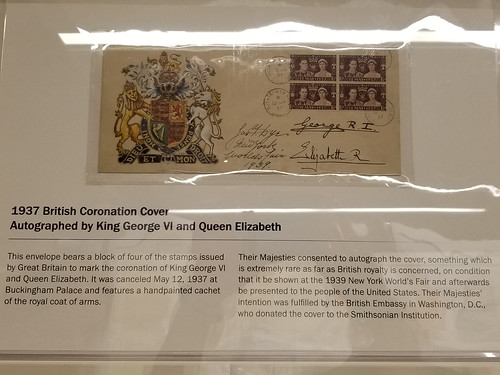