Tropical Storm Nestor dumped rain over the DC area from dawn till dusk, making it a dark, gloomy, wet Sunday. Which is okay, since it was a dry end of summer and I want the fall color to last, but I'd rather it have been on a weekday. We had a quiet morning, had soup and crackers for lunch, then went to Brookside Gardens to see the carnations in the conservatory, hoping the rain would let up enough to make a walk through what's left of the outdoor flowers appealing, though it came down steadily. 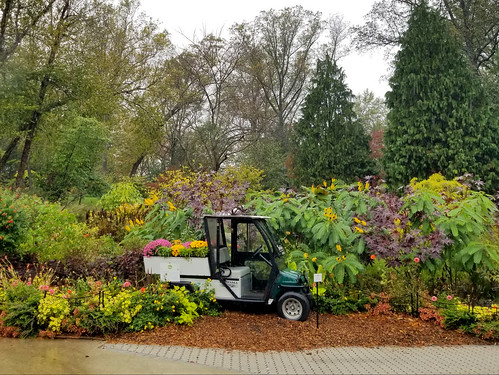 We'd watched the beginning of DC's soggy, boring loss to San Francisco and came home to the surprise of the Ravens' defense beating the Seahawks' offense. Sunday is a crowded TV night now that the fall network season has started; we watched Batwoman, which I enjoyed a lot, Supergirl, which needed more Lena and a lot less Brainy/Nia, and Madam Secretary, which sometimes helps restore my faith in political rhetoric -- these days I will choose a bit didactic and oversimplified over the real world!
Collapse