We had an ominous weather forecast for Halloween, and indeed we had some stretches of hard rain, so I did not have an exciting morning -- I didn't even go to the mall to show off a costume and look at Nationals World Series merchandise (some of which my neighbors already had, since Dick's Sporting Goods stayed open past 2 a.m. to sell it). But it cleared up in time for the annual neighborhood Halloween party, at which we chatted with neighbors, ate pizza, and watched the kids parade in costume.

This year there was a lot of Marvel and DC (Ant-Man, Star-Lord, Wonder Woman, at least two Batmans, Captain America, an adult male couple dressed as Spider-Man and Deadpool) and only one Harry Potter, but there were ninjas, dinosaurs, a few Elsas, a giant banana, and several Washington Nationals fans. Kids started trick or treating in the neighborhood right after the party, but after about an hour, the storms rolled back in and we had a tornado watch, so we have lots of leftover candy to save for later! 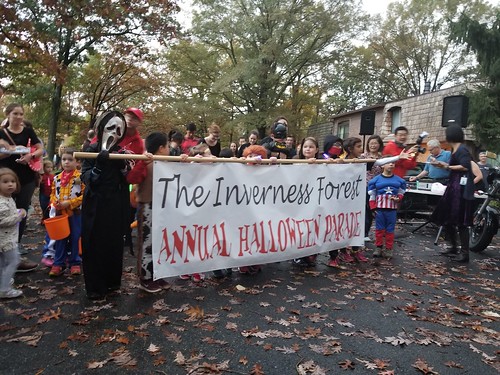