It was not an eventful Monday, though lots of laundry got done and Cinnamon got a traumatic haircut when her chest fur was so matted from sleeping on the heated blanket that it had to be trimmed. Also, although it was lovely and cool, a moth somehow got into the house and Effie is still distressed about it. Since it was so lovely, I took a walk at the Bolger Center, and I did a Cobalion raid when they arrived after 4 p.m.

Since Black Lightning was a rerun, we caught up on the episodes we had missed of Stumptown and Emergence (which is great and I really hope gets picked up), plus we saw a decent chunk of the Cowboys-Giants game though we missed the black cat running play and I hope it's okay! From Longwood Gardens' Blooms & Bamboo exhibit this fall, some of the ikebana Sogetsu arrangements on display in the conservatory: 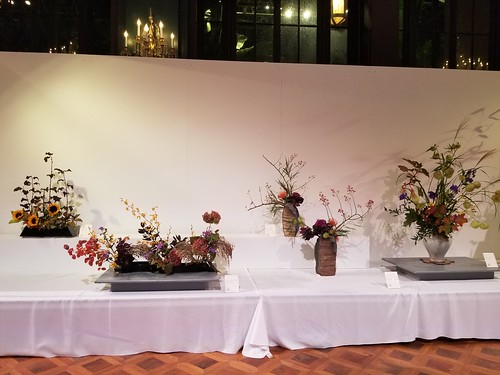