I had a very social Wednesday, so I got nothing practical done but it was fun! Denise came over, we went out to get CalTort's free nacho day chips and some lunch (plus a cherry hamantaschen from Goldberg's, which we shared), and we did a Cobalion raid and a couple of Pokemon trades, plus we watched most of Avengers: Age of Ultron because we were in a Science Bros mood. Then she headed back to Baltimore to beat traffic and I left for Gaithersburg when Paul got home to celebrate Carrie's birthday with Angela, Jack, Lena and several other friends, which was awesome.

We met at Not Your Average Joe's, where I nearly ordered the goat cheese salad but wound up hungry enough to want a veggie burger, and we all ended up sharing a Peanut Butter Thing which is one of my favorite desserts. Then Paul and I came home for the second hour of The Masked Singer, which remains my favorite mindless entertainment pretty much of all time, and Stumptown, and since I don't ship Dex and Grey at all though much of the internet apparently does, I enjoyed her with Fiona a lot. From Longwood Gardens, the last weekend of the summer season fountain show: 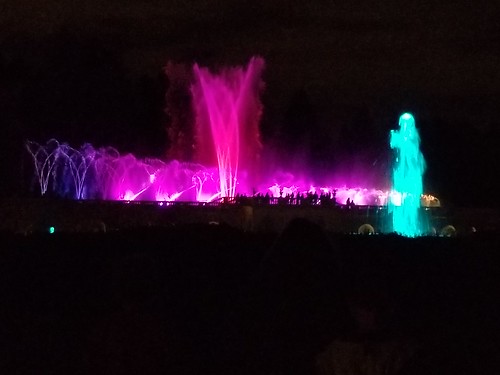