November actually felt like November on Friday -- temperatures in the 40s, leaves falling everywhere. I had a fight with my computer, which decided to run so many Windows Update programs simultaneously that it didn't want to run anything else, so I was very slow getting anything done and went out instead looking for Team Rocket Pokestops, but there wasn't a single one in the park after the one raid I did. I got a protective dining room tablecloth, not the most beautiful because it's vinyl, but the cats hate the way that feels on their paws, so it's working because they're staying off the table!

We had dinner with my parents, who are still celebrating the Nationals victory. Then we watched the first episode of HBO's His Dark Materials, which I enjoyed though I haven't read the books and hardly remember the not-great Golden Compass movie, so I can't be a good critic for fans. Then Vudu had a Hobbs and Shaw viewing party, and while I know next to nothing about the Fast and Furious franchise apart from liking The Rock, I managed to win the Pandemic: Legacy board game, which I guess we will play with the kids when they're here in the winter! Fall color from Winterthur: 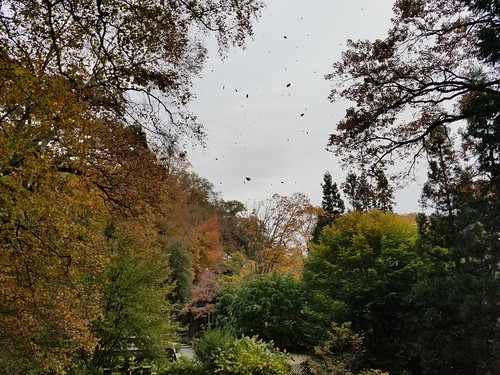