I had a bunch of things to do in the house that I thought weren't going to take very long and I'd get them done in the morning and go out, but a thing I was fixing in son's room had a piece of broken plastic that required improvisation a the thing I was drilling in the kitchen was in a position where I had to use my left hand while standing on a chair, and the things in my closet that I was shifting now that winter is trying to arrive had to be sorted so I could get rid of the ones I haven't worn in forever.

So I didn't actually get out of the house until Paul got home early following a dentist appointment. By then I had gotten into the mood to watch Avengers: Endgame -- I've only seen it straight through twice -- so I insisted on turning off the Steelers game to watch most of my favorite superheroes mostly do things of which I approve. Here are some photos from Winterthur's Hamilton and Burr: Who Wrote Their Stories?, about how their families and other Founding Fathers did just that. 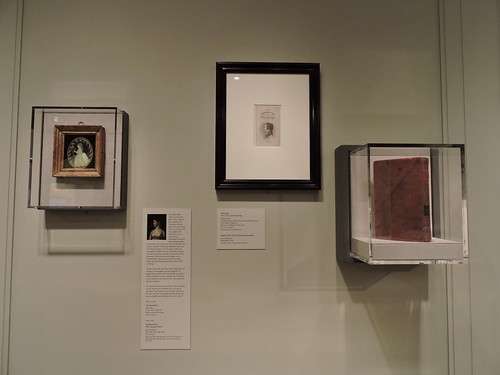