The weather on Sunday was very much like Saturday, a bit more overcast but not very cold, so we went down to the National Arboretum, which in addition to pretty fall trees has an exhibit in the National Bonsai & Penjing Museum, Twisted Genius: The Eccentric Bonsai Artistry of Nick Lenz, which I believe closes this weekend. Lenz curated a collection of trees and ceramics with found objects, whimsical decorations, and some spooky additions. We also walked to the National Capitol Columns and drove to the state tree collection. Then, since we were on that side of the Beltway, we went to The Crystal Fox and looked at Tarot decks and jewelry. 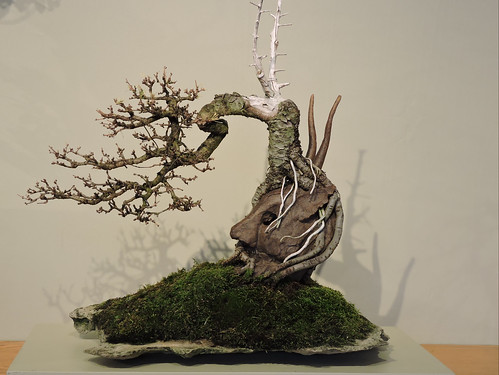 So I did not see any part of the Ravens excellent victory, though I did see the end of New England victory over the Eagles. I also saw this week's Batwoman, which was interesting and sad, and Supergirl, which has done extremely sloppy character stuff with Lena and has pissed me off all season. Then, since Madam Secretary was delayed because of football, we watched the second episode of The Mandalorian, which delights me for reasons that are spoilers but you can find out anywhere on the internet, followed by Madam Secretary, which better not be going where it seems to be or I'll be extremely irritated.
Collapse