I had a fairly relaxing Monday with Daniel, who slept late since he's still not on East Coast time. We had lunch with my father at the mall -- the two of them had cheesesteaks, I had Indian -- then Daniel and I came back here and watched a chunk of the final season of The Man in the High Castle, which we've watched together over Thanksgiving week the previous several years. (Nicole was watching at the same time in New York and emailed several times to discuss things going on in the series, culminating in a late night phone conversation.)

I went out before dinner for a Pokemon Go EX raid, to which I was invited by friends and which I really wanted to do so I could get my first Regigigas. Paul made crab-stuffed chicken for himself and Daniel, so I had a veggie chick'n cutlet with Old Bay seasoning in solidarity, after which we all watched the Ravens-Rams game, in which the Ravens won by so much that I can't even remember the final score (Baltimore caught many passes by their own quarterback and nearly as many by L.A.'s). Daniel had plenty of supervision on the computer: 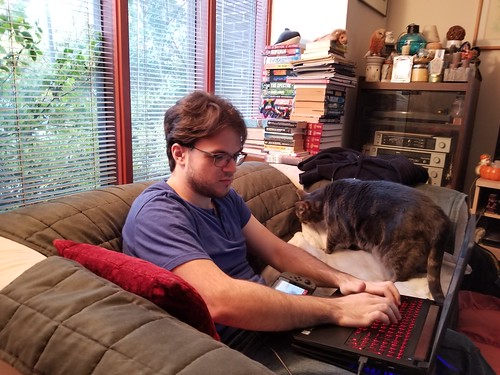