While Daniel slept on Thanksgiving morning, Paul and I watched the Macy's parade, in which the floats were low because of winds and during which I was not moved by Xfinity's E.T. sequel (E.T. should not be forced to advertise cable) nor Chik-fil-a's beautifully made Time ad (because it was Chik-fil-a), though Fox's introduction to the Lions-Bears game by interviewing Brian Piccolo's daughters was a lot more emotional. We took Daniel to walk at Carderock for a couple of hours before heading to my parents' house for dinner with my sister and her family.

We watched a bit of football and some video clips, then ate lots of food made by my mother plus some sides and desserts made by my sister, along with Paul's cookie cake for this year; cookies from previous years are here. Now Daniel and I are catching up on this season's South Park and "Turd Burglar" -- the one in which everyone wants to steal Tom Brady's poop so they can have fecal transplants to get his gut microbiome and become instantly as fit and handsome as he is -- is making me howl. A few dinner photos: 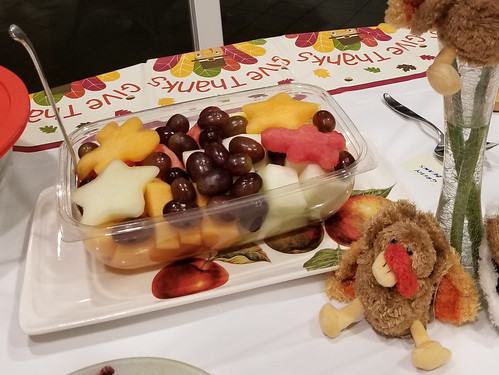