Daniel is on his way back to Seattle, though he will be arriving much later than scheduled because of the chaos caused by weather across much of the country -- his flight was supposed to be direct, but took off more than two hours later than expected and stopped in Minneapolis because the flight crew had logged too many hours. Since we knew there would be traffic on the way to Dulles, we decided to go to the Air and Space Museum's Udvar-Hazy Center, which is one exit before the airport on the toll road. It's a little anticlimactic after having seen Boeing's museum in Seattle, but it's free and it does have the space shuttle Discovery! 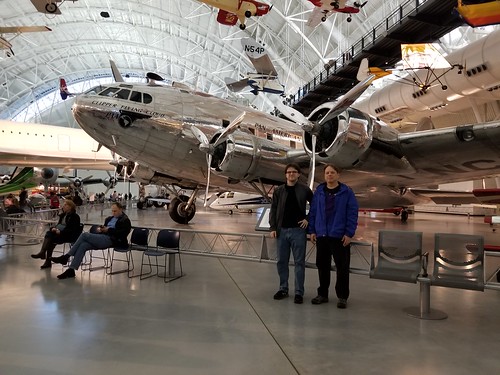 After dropping Daniel off at Dulles, we stopped at CVS and Giant for toothpaste, hair stuff, cat food, and cream cheese, then we came home and ate Nicole's excellent leftover Thanksgiving macaroni and cheese for dinner. Batwoman and Supergirl were on -- the former interesting but very dark, the latter formulaic but I'm here for Kara/Lena until the end of the line. Madam Secretary was on late because of football, which I saw little of today but enjoyed following online (the Ravens beat the 49ers, DC beat Carolina), and I have not enjoyed one minute of the "impeachment hearings are political farces" storyline -- I won't actually cry when the show ends!
Collapse