On Thursday I went to a bunch of stores in a shopping center that recently acquired an Aldi, and I don't know whether it's the presence of the Aldi or the holiday shopping season in general, but the parking lot was so insane that I am seriously rethinking my plans to avoid shopping at Amazon wherever possible. The main reason I went was because Five Below, which recently moved to this shopping center from further down Rockville Pike, has very inexpensive cardboard scratching posts that Effie loves, but I also went to Michael's, Bed Bath & Beyond, and Tuesday Morning, none of which had anything exciting left on sale at this point.

It was a very shopping-focused day. When Paul got home, we went out to CVS (which sent me birthday coupons including one for free nail polish, which is odd since I don't wear nail polish -- do all customers get one? just women?) and to Giant (because cat food is an ongoing need), plus we ducked into Attman's to get bagels since Goldberg's closes in the afternoon. In between the beginning and end of the Bears victory over the Cowboys, we caught up on Black Lightning, which still could use more humor but at least is more focused on the main family again. From the Udvar-Hazy Center, here are several angles on the space shuttle: 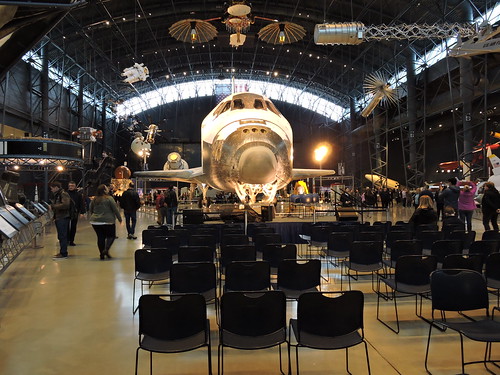