Cheryl, Paul, and I spent Sunday in Delaware and Pennsylvania, starting at Winterthur, where we ate in the cafe, walked through the garden, went to the exhibit on the costumes of The Crown, and took the Yuletide mansion tour (we had only six people in our group, so we got lots of attention from the guide, and there were lots of gorgeous decorations). Then we went to Longwood Gardens, where we walked to the bell tower before the sun set, went through the decorated conservatory (including a candy shop in the library), then went back outside when it was dark to see the "fountains" of light, the train display, and the hundreds of lit trees and ground displays outside. We stopped at Burger King for Impossible Whoppers on the way home, where we arrived in time to watch the series finale of Madam Secretary, which I liked better than pretty much the rest of the season and it was nice to see so many reunions. 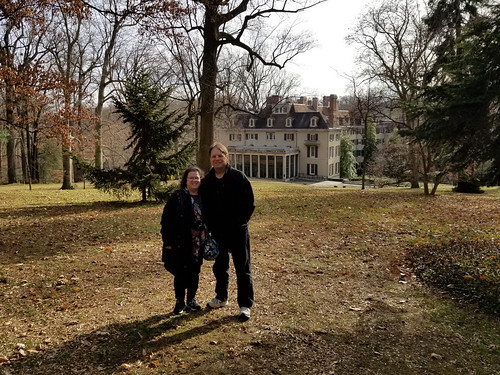