I had a quiet Monday, since it rained all day and I had to wait for a couple of deliveries, plus I had a bunch of household chores to get done and lots of emails to answer since I was out of the house all weekend. Forgot to mention yesterday how sad I was to hear that Rene Auberjonois had died -- Carroll Spinney too, but it's been decades since I felt any personal connection to Sesame Street, whereas Deep Space Nine remains my favorite of the Star Trek shows and Odo/Kira probably my favorite het relationship in TV history. I interviewed Auberjonois more than once about it and he was absolutely lovely, plus I knew him before it from M*A*S*H and Benson and loved him afterward on Boston Legal and Madam Secretary among many other things.

We watched Sunday night's Supergirl after dinner so that we'd be caught up on the Crisis on Infinite Earths crossover before Batwoman and Black Lightning. I haven't watched Arrow in I don't know how many seasons, so I was not emotionally engaged at all with Oliver's story arc and was preoccupied with questions like "When the hell did he have a daughter and why is she an adult?" But the second installment just made me squeal with glee over and over -- Robin! the Smallville sequel! Superman vs. Superman! -- and I'm so glad Jennifer Pierce finally got an episode that was all about her, not about her-and-her-boyfriend or her-and-her-sister. And the Giants-Eagles game was surprisingly close! Some pictures from Longwood Gardens' outdoor Christmas displays: 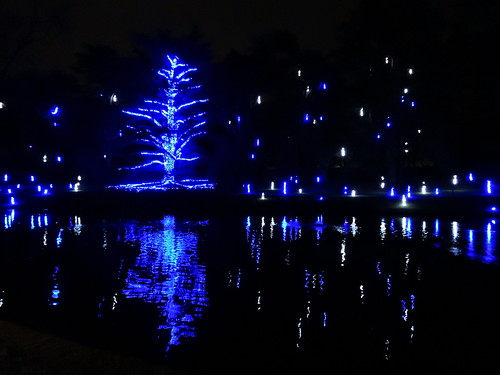