My Thursday was far less eventful than my Wednesday, unless you count screaming in disbelief at the screen while following the news. I had an early doctor appointment, which went fine other than she wants to do a couple of tests just to make sure everything she can't see is fine, so I get to do that next week, oh joy. I then came home to clean up all the stuff I neglected to do the previous couple of days, rearranged my Tarot decks to make room for the new ones, and tried to catch up on email, which is a lost cause at this time of year. Paul had dental work that required numbing his face, so we had leftovers for dinner.

After the "ham" and cheese pie, we watched this week's Watchmen, which has been completely gripping -- I liked the movie but the show seems so much more relevant. I wish I could say the same for His Dark Materials, which just is not grabbing me -- keeps feeling like a beautifully filmed but completely derivative Narnia/Middle Earth mashup with fictionalized violence against children and animals that doesn't have a precise real-world parallel, so instead of feeling emotional to me, it feels manipulative. But the Ravens won! Winterthur Christmas trees, including the March Bank, Peony, Dried Flower, and Chinese Parlor trees: 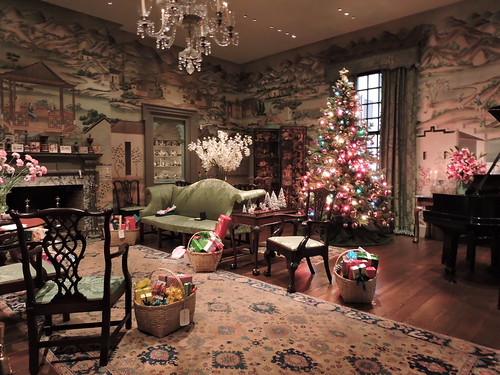