We had rain dawn till dusk, and two major local accidents involving vehicles and children that closed two major local roads, so since it was Friday the 13th anyway, I figured I should just stay indoors. I got a lot done in the house but it's all too boring to talk about, except discovering that I now have too much Avengers-themed jewelry to fit into a single case. I got an identical comforter to the one on my bed so I can wash it more regularly without distressing the cats who are the reason it needs to be washed so often, but I don't know whether they approve of the new comforter because they were too excited about the box it came in.

We had dinner with my parents, who decided to continue my birthday week since we didn't have birthday cake on Wednesday, so I have now had ice cream cake and it is such a good thing I don't have any appointments at which I need to be weighed next week. We came home for The Mandalorian, whose episode storyline wasn't my favorite of the season but had a dozen awesome guest stars to make up for that. Then we watched The Last Jedi, which we've only seen once and wanted to make sure we remembered properly for The Rise of Skywalker next week. Here are some of the many Christmas trees in Longwood Gardens' conservatory: 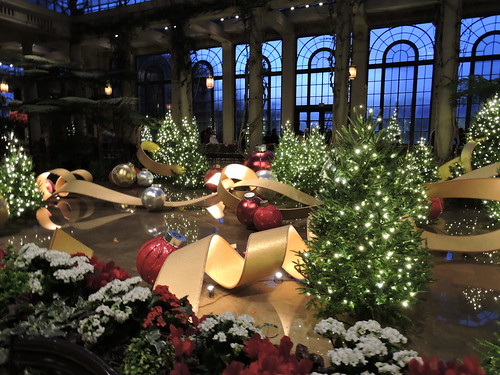