Nothing about my Monday went according to plan, though it wasn't all bad. I had had plans with my next door neighbor to have lunch, but on Sunday I got a call from a friend who had to be in the area for a medical appointment who wanted to have lunch and chill afterward, so I convinced my neighbor to postpone. Then my friend's windshield wiper broke while she was on the GW Parkway and she pulled off at the first exit, which turned out to be the CIA, whose guards were very suspicious until even they couldn't figure out how to fix her wiper. We wound up not having lunch so she could drive during a lull in the rain to a garage near her house to get it repaired.

Then I got my new Google Home Mini, so now I have one in the living room and one in the bedroom, meaning that I can say "Hey Google, wake me up with my Sentimental Shit By White Guys playlist at 8:30 tomorrow morning" and it will, but it took a little while to get both Minis synchronized with the Google Home app. Then Paul arrived home with our new modem, which we realized we should get set up before we have three more people staying here with phones and computers in a week, given that our movies often glitch and fail to stream when just the two of us are on computers and trying to watch at the same time. That also took a bunch of time to reset the network.

By the time I was done moving stuff around my computer to untangle and remove the old modem's wires, we were late for dinner. We watched the new episode of His Dark Materials, which I'm glad ends next week because the only thing more annoying than the absence of daemons in scenes where we should see them are the ridiculous CGI bears...actually, no, the fact that every adult woman in White Male Fantasyland is Evil, a servant, or A Weeping Mom is the most annoying thing. We also watched the Watchmen season finale, which is the exact opposite -- awesome showdown between two women of color to shut down the Klan! Breezy Hill Farm on the Countryside Artisans tour: 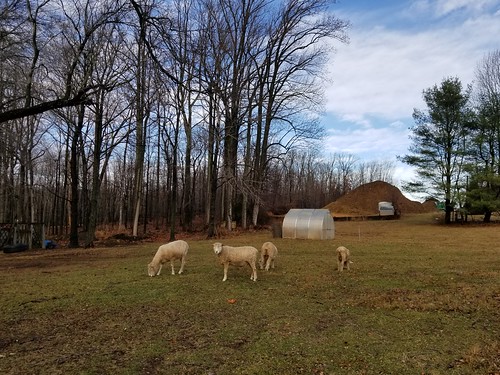