This will be quick because I have lots of chores to get done before I go see Star Wars: The Rise of Skywalker on Friday, then go pick up younger son and his girlfriend from the airport right afterward! Paul worked from home because the van was (and is) still at the dealer getting various things repaired, and I needed the car for my semiannual dental torture session I mean cleaning. Afterward I went out for hot chocolate, which is just what the dentist ordered, and did a Pokemon raid at Starbucks. J.K. Rowling has made me so furious I'm sick.

I didn't watch the debate -- I don't expect anything on that stage to change the order in which I'd choose the people there and two who weren't invited but should have been. Instead we watched the recent BBC A Christmas Carol with Guy Pearce, which made major changes, not all good, though they gave Mary Cratchit some agency and Scrooge a very dark backstory that undercut the worst of the usual anti-Semitic stereotypes. Here are some of Longwood Gardens conservatory's seasonal plants and holiday decorations: 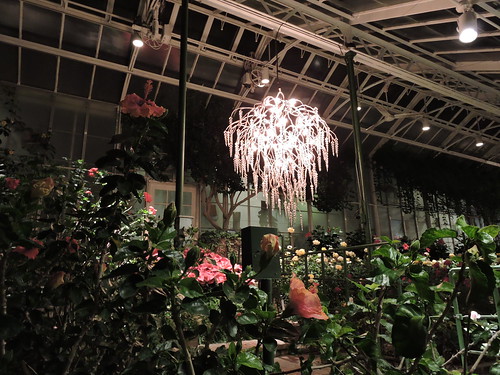