Paul worked from home on Monday morning while all the young people in the house slept in, then we had breakfast together at 11 and drove downtown to L'Enfant Plaza so we could go to Artechouse to see Aurora: The Spirit of Northern Lights, an interactive light display creating a winter forest, a snow cave, and skies filled with snowy light. There's even a bar that serves drinks with augmented reality tags so that ice crystals and snowflakes appear around the drinks and drinkers if you hold them up to your mobile phone with the Artechouse app running.

From Artechouse we walked Katherine to the train to head to her home, then headed to the US Botanic Garden, which has its annual show of plant-based replicas of the buildings of the National Mall, plus model trains, poinsettias, and outdoor holiday lights. After walking back to the car, we were all hungry, so we went to the Silver Diner for which I had a coupon for a free birthday dinner and dessert. We started to watch The Witcher, but it was slow to get going and a lot of episodes to cram in, so we watched 6 Underground, which may be the most Michael Bay movie ever made! 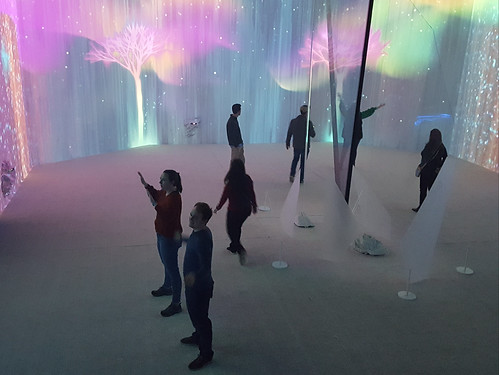