Adam came back early from his movie marathon to shower and change, then we drove him into the city to meet Katherine's family at the Kennedy Center to see My Fair Lady. We had thought about visiting art museums with Daniel while we were downtown, but it was over 60 degrees and we decided we wanted to enjoy the weather before the forecast rain on Sunday, so instead we went to Potomac Overlook Park, which has hiking trails and a nature center (and a bandstand where we've seen concerts, though not at this time of year).

My parents had invited Katherine's family to come for dinner and to celebrate Chanukah, so we went to their house in the evening and met up with Adam, Katherine, her parents, brother and sister, and a cousin. We ate a lot, played some dreidel, exchanged some gifts, and caught up on various local and global events, including the LSU-Oklahoma game. When we came home, we watched the end of the Clemson-Ohio State game, and as much as I don't like having to root for the latter as the Big 10 champion, I don't like unfair calls against them even more! 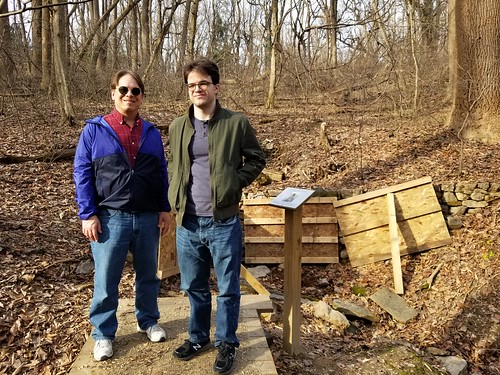