The house is quiet tonight because Adam is in Fredericksburg, staying with Katherine's family for a couple of days before they fly to San Francisco, and Daniel is still at MAGFest, where the only things I know for sure that he is doing are video games on huge screens, Mario cosplay, catching Pokemon, and drinking a lot of Mountain Dew. Paul worked from home in the morning so we could drive Adam to the Metro together, then he went to the office and I did a bunch of chores in and out of the house (CVS, Goldberg's Bagels, laundry, kitchen disasters, putting gifts away). The cats appeared confused.

We had dinner with my parents (and my mother found her wedding ring which she had lost in a drawer). Afterward, we watched the season finale of His Dark Materials, which I did not like better than the rest of the season, then we caught up on Graham Norton's show, so we got to see the Daisy Ridley-Henry Cavill episode, the Kevin Hart-Dwayne Johnson-Jodie Whittaker-Michael Palin episode (which is hilarious), and the new Tom Hanks-Matthew Rhys-Florence Pugh-Stephen Graham episode. Here are some of the creches on display at the Mormon Temple, which I figured I should post before we get too long past Christmas: 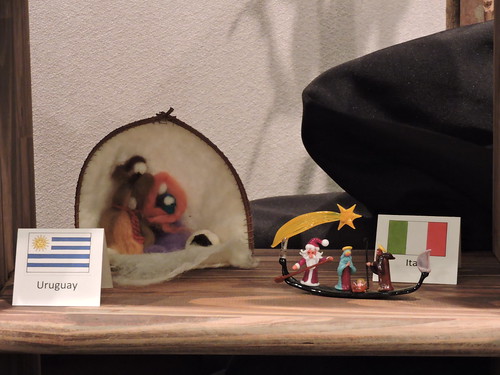