After being awoken before dawn by a sick cat, we slept a bit late on Sunday, had a quiet morning cleaning up some of the house, I went to do a raid and caught a shiny New Year Raticate, then we had lunch and went to pick up Daniel from MAGFest. Since it was a nice albeit chilly afternoon and we were in nearby National Harbor, we then went to Oxon Hill Farm to see the sheep, cows, horses, and chickens -- I guess the turkeys are elsewhere for the winter. On the way home, we stopped at the mall because Daniel wanted to get a carry-on from the luggage store to bring home all the things he got for and at the convention, plus we stopped at Giant for vital necessities like cat food and toilet paper. My parents invited us over for pizza, so we had dinner there while watching the Seahawks beat the Eagles. 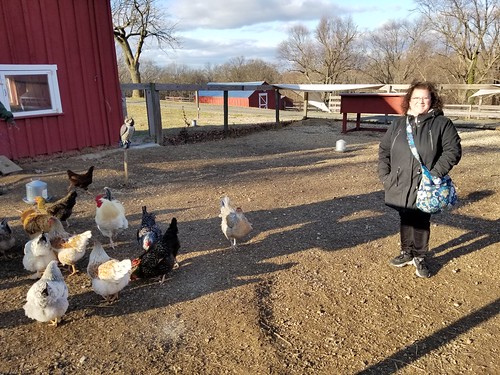 I didn't intend to watch the Golden Globes -- I thought we'd all put on a movie or something -- but Daniel was doing laundry and after putting it on to see who Ricky Gervais insulted first, I ended up watching and enjoying a lot of things. I thought The Loudest Voice was excellent, so I was delighted Russell Crowe won for it and also liked the speech he had Jenifer Aniston read for him about the need for science to combat climate change that's causing such disastrous fires in Australia, a topic many people spoke about after Gervais joked that they should shut the *bleep* up about politics. (He also made a joke about action heroes who take too many steroids, which I hope is why Jason Momoa took off his velvet suit coat to show off the magnificent guns he's had for far more years than he's played Aquaman.)

I was pleased Ramy Youssef won, pleased Stellan Skarsgard won, pleased Laura Dern won, pleased Michelle Williams won (and I adored her pro-choice speech as much as Tiffany Haddish and Salma Hayek did), happy for Fleabag's win and for Phoebe Waller-Bridge in a field where I didn't know whether to root for her or Kirsten Dunst given how great the latter was in On Becoming a God in Central Florida, but Awkwafina winning in a too-white field was my favorite acting award of the night. Kate McKinnon presenting the Carol Burnett Award to Ellen was pure joy, as were Taylor Swift giving Elton John a standing ovation for beating her for Original Song and Tom Hanks singing The Love Boat theme after his clip show. I'm pretty apathetic about the idea of Renee Zellwegger as Judy Garland.

Now, I love Taron Egerton, but I suspect Eddie Murphy was equally worthy for Dolemite Is My Name and Hollywood still owes him for not awarding him an Oscar for Dreamgirls. Given a list of nominees missing Gerwig and Matsoukas, I suppose Sam Mendes as best director was a best case scenario, and I was so glad Scorsese was shut out! Plus I hate the whole idea of Once Upon a Time in Hollywood rewriting terrible history. I approve of everything Succession won. Unsurprisingly, my second-favorite acting award of the night was Olivia Colman's for The Crown, though I suspect this is the last time she's going to be able to get away with claiming she's a bit drunk and has no speech prepared because she was so sure someone else was going to win, just as she did at the Oscars.
Collapse