I had a fairly quiet Wednesday, which was what I planned -- I had two laundries to fold and I wanted to make a necklace using the beads I got at Michaels on Tuesday, though I ended up having to go back to Michaels because I was about 20 tiny white beads short (fortunately they gave me a coupon yesterday so the tube was less than $2). And the necklace got made and the laundries got put away, so that's all good!

We decided to see Bombshell, having seen The Loudest Voice; the acting, particularly Theron's, is excellent, though I think Crowe's Ailes, which had a lot more time to develop, is more nuanced than Lithgow's and it was interesting seeing the harassment case in the larger context of the climate of white male privilege at Fox News. We got back in time for enough of this week's Stumptown to follow it.

Daniel messaged so we'd know he was already home when the shooting in Seattle started. At Hillwood earlier this month, the dining room, which was ostensibly decorated for Christmas, had an unusual table centerpiece: artist Bouke de Vries' War and Pieces, created from porcelain fragments and plastic toys, a nuclear explosion of Greco-Roman and Christian imagery which I guess represents the fall of the ancien regime? 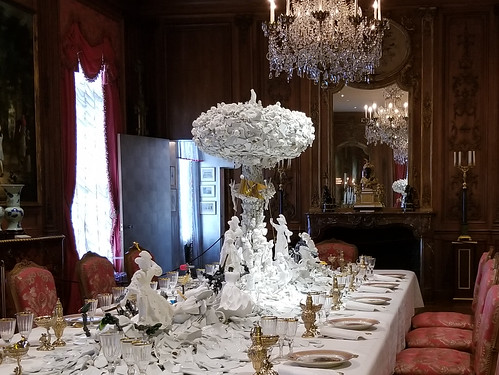