We had to go to the bank in the morning -- we had an appointment, but of course everything took longer than we expected -- so we did not get to the lion dance for the Chinese New Year at Lakeforest Mall, but we did come home, eat a quick lunch and go to the Elizabeth Hartwell National Wildlife Refuge in Mason Neck. We've seen eagles in Mason Neck before, though we didn't this time despite driving to Hallowing Point in a nearby neighborhood, where we were told they had built nests, but we did see dozens of wintering tundra swans and many types of ducks plus possibly coots and cormorants. It was a gorgeous sunny day, perfect for the walk in the woods to and from the overlook! 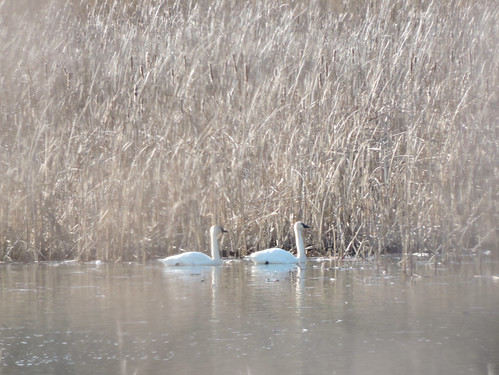 On the way home we went to Giant, then returned to starving cats (and starving selves) and had ravioli for dinner. Afterward we watched Alita: Battle Angel, which was fairly enjoyable though not terribly good -- reminded me visually of every dystopian future movie I've ever seen, particularly Rollerball, Equilibrium, Real Steel, Blade Runner, Terminator, and whatever the Jodie Foster movie where rich people live on a space station -- I know the manga is older than several of those, but the movie, while well-constructed, wasn't very original. But it passes the Bechdel test about five minutes in and the women are reasonably interesting, so there's that in its favor!
Collapse