After several days of rain, the sun finally came out on Friday, though not before a huge morning storm and multiple tornadoes in the area, though not right near me. So I did a bunch of indoor chores in the morning and went out in the afternoon. The park was still a bit muddy, but there were lots of birds apparently happy to be able to fly without wet wings, and a herd of at least six deer crossed right in front of me, causing a lot of honking behind me (not sure whether that was directed at the deer or at me for stopping for them).

We had dinner with my parents and afterward had a quiet evening catching up on TV -- first Picard, courtesy my neighbor, which is holding my interest mostly on the strength of Patrick Stewart's performance, then Miracle Workers, which may be even crackier than last season (Daniel Radcliffe and the duck!), and finally Graham Norton, which was a lot more interesting before Jim Carrey came out and monopolized the conversation, while Daniel Kaluuya and Jodie Turner-Smith could still get a word in edgewise. Loving flowers in my neighborhood: 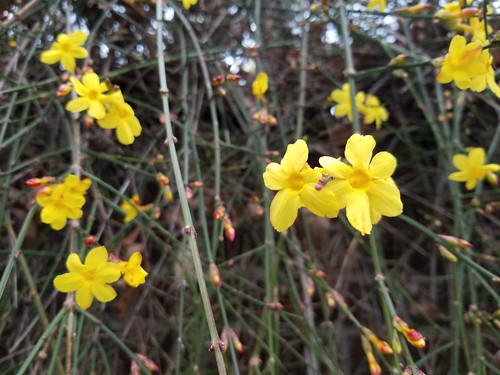