I actually was out of the house most of Wednesday! And it didn't rain till sunset! I met Kay for lunch at Tara Thai, then walked around Washingtonian Lake, managed not to spend any money in Target or Kohl's (mostly because they didn't have exactly what I wanted), and generally enjoyed the sunshine and being honked at by geese. Plus I raided a 98% Tornadus with strange men.

The rest of the afternoon was not as satisfying, since I spent literally hours on the phone with CVS Caremark, which tried to convince me that 1) my prescription was not my prescription and 2) my account was not my account. When I got THAT straightened out, they tried to convince me that my non-generic should cost $300. Now I'm waiting for my doctor to call back and do something about that!

We watched The Masked Singer, which is always mindless delight (Gronk is still a masked tiger even though he can't sing), then half-watched Lego Masters where I hate that they Chopped the middle aged women home, and finally Stumptown, which I predicted early on but still enjoyed. Here is some color from the orchid extravaganza in the conservatory at Longwood Gardens last weekend: 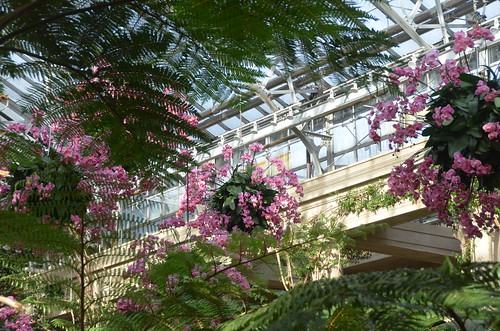