We were back to rain most of Thursday, but it was pretty warm out, so I don't know whether to complain or not -- I feel like we pretty much missed winter, which says bad things about the climate and everything is blooming too early (which everything may regret on Friday when we're supposed to have temperatures in the 30s), but I mind walking in the rain a lot less when it's not miserably cold.

It was otherwise not an eventful day -- I folded laundry while watching some Crazy Ex-Girlfriend, I made some charms, I researched pharmacies and now have heard terrible stories about every single one from which I could get my prescriptions. We discovered we did not have enough leftover fake beef and noodles for dinner, so we had it with leftover pizza, which was kind of a weird combination.

After dinner, we watched two episodes of Inspector Morse, one of which (from the '90s, so not that ancient) was excruciatingly misogynistic, so I miss Lewis and Endeavour. Colbert and John Oliver just made me cry describing fake movies they could be in together, though -- Les Expendables! Here are some more wet premature flowers blooming in the warm rain in my neighborhood this week: 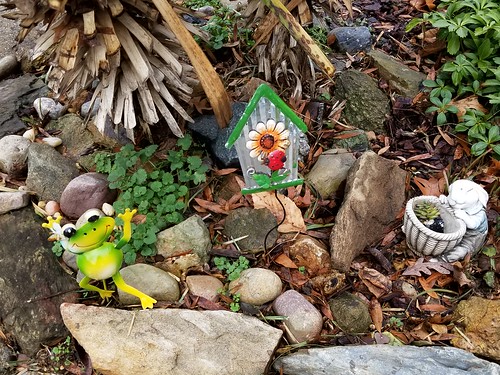