We had gorgeous spring-like weather on Presidents' Day, so after lunch, Paul and I went to Green Spring Gardens in Alexandria. We were expecting to find only snowdrops and maybe some crocuses and hellebores outdoors, but there were apricot blossoms and even some daffodils as well as the park's famous collection of witch hazels. Plus there were orchids and birds of paradise in the glasshouse, and geese and robins around the lake, though the house and shop were closed for the holiday. I even brought a spring goddess for photos. 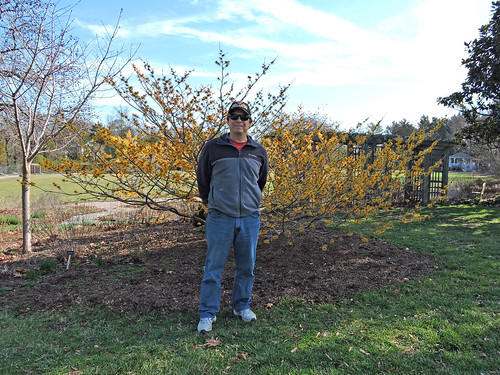 It was a TV catch-up night, starting with Doctor Who, which was a fun Gothic reimagining but I really wanted Mary Shelley to be more proactive. Then we watched the new episode of The New Pope, which is super-problematic about women, though I hope that's the point since this is largely about how sociopathic the Vatican patriarchy is. And we caught up on the second episode of Zoey's Extraordinary Playlist, which has some nice moments but also buys most of the romantic musical comedy cliches Rebel Wilson skewers in Isn't It Romantic.
Collapse