Tuesday was pretty in the morning, then turned drizzly while I was on my way home from the park, so at least I got out early enough to enjoy it (and to get bagels before Goldberg's was out of pumpernickel). That was my only adventure outside. Inside, I set up my old flatbed scanner, intending to make inroads into the 30+ years of photos from my life before I had a digital camera, but the newer versions of Photoshop apparently don't like the old Epson scanner software, because I had to reset the resolution and format before every single scan. I still have not found a solution to this: Photoshop says it's in Organizer, but the menu Help says to use does not exist in my Organizer software!

I had to content myself with scanning only the beginning of our 1999 trip to Yellowstone before dinner. Afterward, we watched this week's The Flash, which lost my attention when Iris could figure things out in five minutes that a scientist couldn't do in six years while Ralph forgot he could be Silly Putty whenever convenient. Legends of Tomorrow at least had undead headless Marie Antoinette! And we watched the second episode of For Life, which continues to be more convincingly acted than written but is still interesting. From Conowingo Dam, here are some of the great blue herons, vultures, seagulls, and the very top of the head of the eagle in the nest on the electric tower: 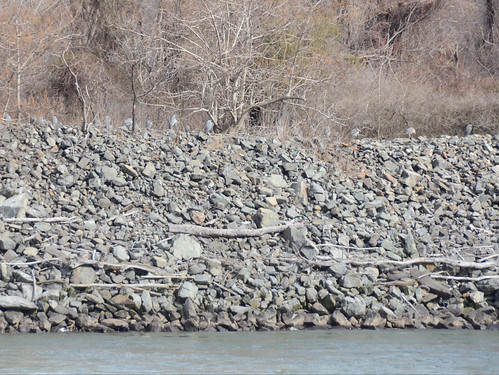