My friend Mary from Ohio, whom I met online because of Star Trek many years before I met her in person, is in the area visiting her mom, so on Thursday we met at Cabin John Park to indulge in nostalgia for our childhoods and our kids' childhoods -- not too easy, since there's really only one structure left from 50 years ago and only a couple more from 25 years ago, but Porky the Litter Eater and the train are still there -- and took a walk down to the creek, since we both like cool weather. We even saw flowers! Then we went to lunch at Le Pain Quotidien, where I had an awesome gruyere omelet and we split dessert. 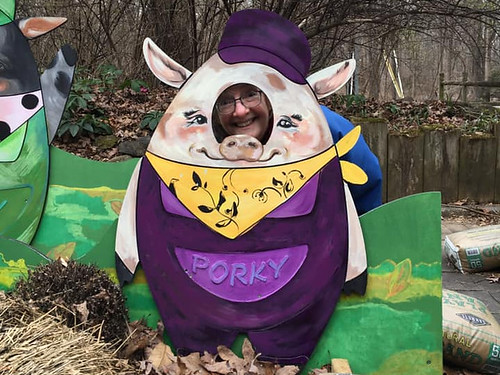 The rest of my afternoon involved chores and some more photo sorting. I realized it was the anniversary of our 2002 trip to California, so I uploaded a bunch of those to Facebook, which of course put the dates all wrong so it took a long time just to straighten them out, around dinner and two episodes of Morse, one of which was more sexist than the next and I'm thinking this show has not dated well. Now I have the Cats parody episode of Crazy Ex-Girlfriend on, so I'm laughing too hard to type (and yay new Greg, whom I like so much better than old Greg that I can finally stomach it if Rebecca ends up with him)!
Collapse