I had a very lovely, long day downtown on Saturday, starting before 10 a.m. because we had tickets for the Future Sketches exhibition at Artechouse, which was amazing as are all their installations -- this one was Zach Lieberman's attempt to approach the question, "What does code feel like?" with graphic art, music, and multimedia. Pokemon Go Community Day started right as we were leaving the exhibit space, so I spent a couple of hours walking through the gardens around the National Mall catching Rhydons and discovering that daffodils, violets, hellebores, witch hazel, redbuds, and crocuses are blooming all over the place!

We had lunch in the cafeteria at the National Gallery of Art (a good place for quick veggie burgers and also for catching Pokemon), then went to see True to Nature: Open-Air Painting in Europe, 1780–1870, which was gorgeous and made me want to travel, and Raphael and His Circle, which thrilled me less but was still well done in a very small space. We stopped in the Smithsonian Castle on the way back to the car so I could get this year's cherry blossom festival pin and I chased a Trubbish that I couldn't catch to the Air & Space Museum. Then we stopped at home briefly to feed the cats before going back out to Giant for this week's groceries. 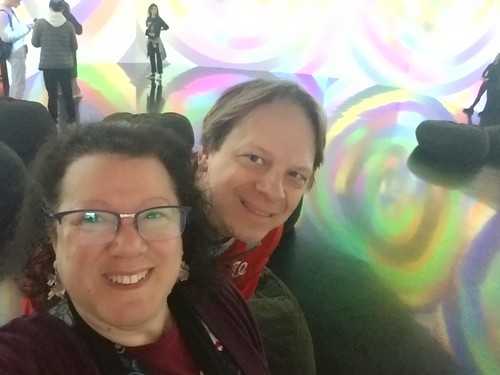 Paul made peanut soup for dinner for Washington's birthday, which we ate with sharp cheddar and crackers followed by vegan chocolate ice cream. We caught up on the Graham Norton episode we missed Friday (Timberlake and Kendrick not that funny) before watching Judy, in which Renee Zellwegger is actually as good as everyone said, something I really doubted was possible, though it's such a sad biopic (L.B. Mayer almost a cartoon villain, Mickey Deans written as a predictable asshole, Sid Luft sadly sympathetic since we only hear about his bad marital behavior in the past tense, Judy's friendship with Rosalyn the only bright moments).
Collapse