I got up early on Monday to get fasting blood drawn for routine tests, and of course they made me wait half an hour past my appointment, so when I left I was hungry and cranky and promptly went home to eat an entire bagel with cream cheese. Then I did some work and went out to do an EX raid courtesy an invitation from a friend in my local Pokemon group, after which I went out for coffee (well, hot chocolate) with a different person from the group and made a couple of stops in the mall, mostly to try on a Vera Bradley sling bag in one pattern that I wanted to order for less than half price from the outlet in a different pattern if I liked the way it felt for carrying little camera stuff.

We had a TV catch-up night around The New Pope, which was awesome -- I love Malkovich but I have missed Jude Law, and I can't wait to see them have a faith-off! I also really liked this week's Doctor Who, thought they did a great job starting a two-parter and balancing a flashback story with a new character alongside the companions and villains. And we caught up on Zoe's Extraordinary Playlist, which remains pretty uneven -- maybe I'm biased from watching Crazy Ex-Girlfriend at the same time, but it makes me want more creative use of music and more independent women. Here are more photos from Future Sketches at Artechouse of us exploring the code! 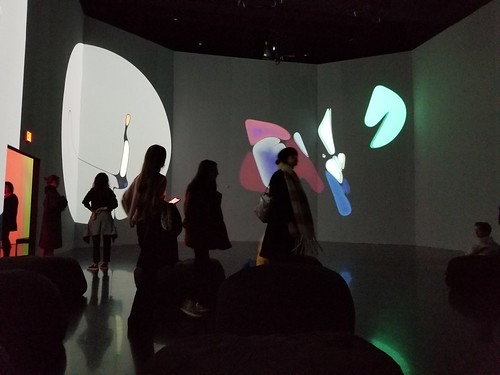