After loud overnight thunderstorms, we had a lovely clear, much cooler day on Thursday. I did a bunch of work in the morning, then went to Park Potomac to do a Pokemon raid that wound up being a disaster -- one of my phones kept getting kicked out, so I asked a friend if he wanted to help raid, which he did, but then my phone battery died before I could catch the Blastoise -- at least the trees in Park Potomac were in bloom and I walked along the woods trail looking at all those pink blossoms! I enjoyed the weather and avoiding the news all day!

We spent the evening after dinner watching two episodes of Inspector Morse on PBS. We never know in advance which ones we're going to get, so it was a delightful surprise that one of tonight's had Sean Bean (who didn't die!), Jim Broadbent, Phil Davis, and Colin Firth's brother Jonathan, plus one of the better-written women on the show, the prison warden, who's a big improvement over the crying, fainting women of the other episode aired tonight about stolen rare manuscripts and an opera singer with stage fright on whom Morse of course has a crush.

In other TV news, last night I finished watching Crazy Ex-Girlfriend, which I started while all the late-night hosts were on vacation/in reruns and then found stressed me out a lot less than late night infotainment even though I don't much like several of the main characters (diagnoses or not, there's a degree of meanness, self-absorption, and unacknowledged privilege that occasional recognition don't balance). The musical numbers range from entertaining to absolute genius and I listen to them over and over! From David Scheirer's Coastal exhibit at Strathmore: 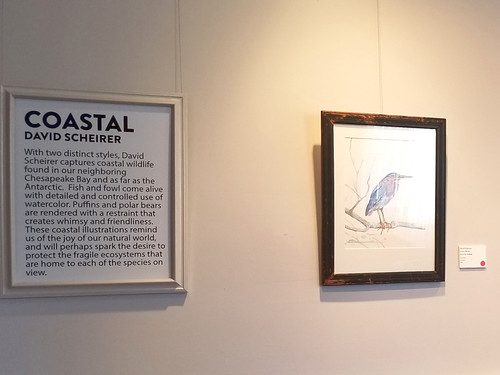