It was a lot colder on Friday than earlier in the week, and we even had some flurries in the late afternoon though nothing stuck. Earlier in the day after I finished the various chores I had to get done at home, I went for a long walk in the park, did a Venusaur raid that was nearly as much of a disaster as my Blastoise raid from Thursday -- my baby account was kicked out just as the raid ended so I couldn't catch the clone Pokemon -- but it was a great day to be outdoors, so it's all good.

We had dinner with my parents, then came home and watched Pokemon: Mewtwo Strikes Back - Evolution, having seen the original in theaters with our children back in the day. I liked a lot of the new graphics and the way they recreated many of the scenes, and I was glad to see more Mew, though not so much during fight scenes, but I really missed the music, especially "Brother, My Brother" during the climactic fight scene. Here are some more flowers outdoors at Brookside last weekend: 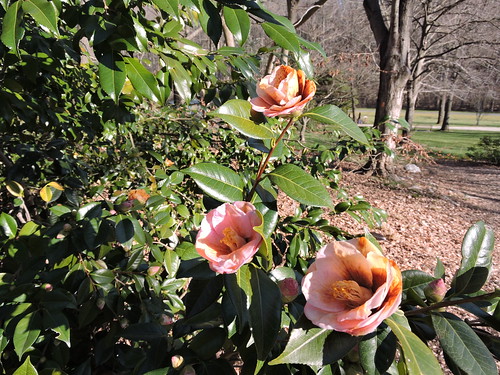