My friend Alice had an appointment in Bethesda on Thursday morning, so I got to see her afterward and go girly shopping and have lunch! We bumped into my dad just after arriving and walked with him for a few minutes, then went to Sephora, The Body Shop, White House Black Market, Claire's, and some other stores -- yes, I smelled like a perfume truck overturned on me -- before getting Indian food and eventually coming back to my house before Alice had to go home. Then I took a walk around my neighborhood to see the daffodils and hyacinths that are suddenly blooming!

We had my mother's leftover chick'n with penne alfredo for dinner, then we finally, belatedly started watching Jessica Jones, which I'd been ambivalent about because I knew sexual violence was a central theme and I knew David Tennant was central to the sexual violence, but I thought the first two episodes were very well written and well acted so I'll watch some more and see how I feel. I could only handle so many white women's tears over Warren, who didn't ever cry for Kamala or really campaign for Hillary, so I turned off late night TV! Canoes at Great Falls last weekend: 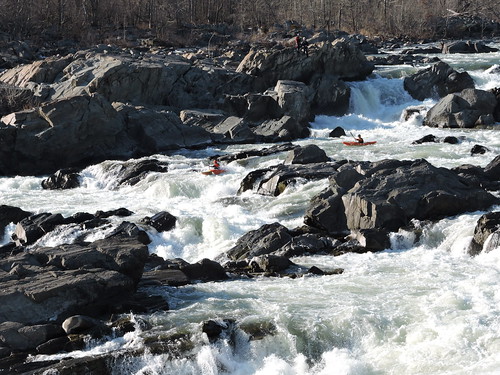