Tuesday was another warm day, but it was drizzly, so I didn't wander as far afield and spent a lot of time in the house doing chores to keep an eye on Daisy, who is still stuffy and cranky and is seeing the vet tomorrow -- I can't tell whether she has an earache or a sore tooth or is just bothered that her sinuses are stuffed so she's rubbing that side of her face, but we're going to find out. Anyway, the most exciting parts of my day were on the TV screen, apart from dinner when Paul made savory hamantaschen for Purim to go with the chocolate ones my mother got us last week.

We watched The Flash, which is boring me even more this season than last season, and Legends of Tomorrow, which had some touching moments and the awesomeness that was Mr. Parker's Cul-de-Sac with puppets and everything! Then we watched the season (series?) finale of The New Pope, which was great in every way, surprisingly moving, taking the issues of faith seriously and also concerned about the many dark aspects of organized religion. I loved Jude Law and John Malkovich playing off each other! Now some adorable animals from the National Colonial Farm at Piscataway Park: 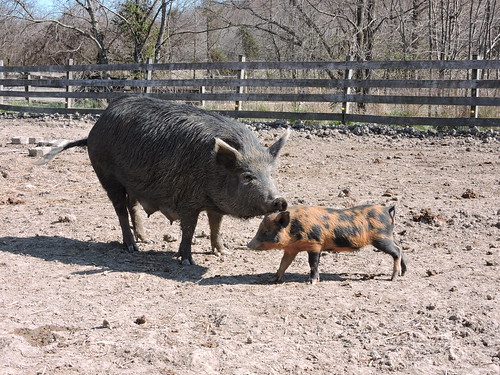