These sequestered blog entries are going to get kind of repetitive, I'm afraid. Weather was nice, neighborhood was quiet though very pretty -- full daffodils and forsythia, decent number of hyacinths, several magnolias, some apricot and cherry blossoms, tulips starting. After eating well on Tuesday, we had leftovers for lunch (Ethiopian) and dinner (chili). After Paul finished his phone conferences, we walked in Cabin John Park, where social distancing should have been easy but there was a family that insisted on walking five abreast in the narrow paths instead of, you know, single file while passing people.

At least we had a full slate of new evening TV: The Masked Singer, which remains delightfully fun nonsense, following comments on Twitter nearly as much as watching the performances since people's predictions keep changing; LEGO Masters, which desperately needs more entertaining judges than Condescending British Woman and Smarmy Arrogant Man, as the kids and Will Arnett proved this week; and Stumptown, not my favorite, assumes poly means cheaters. And so glad Colbert, Fallon, and Kimmel are working from home! I spent much of the day scanning old photos, so here are some from Maryland Day in 1999: 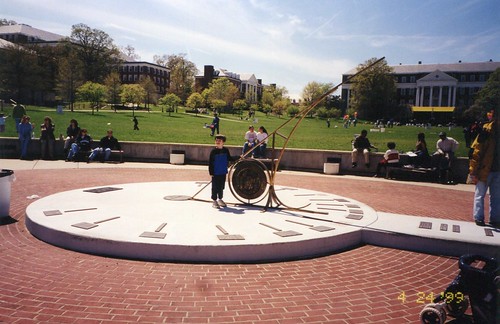