Sunday was cooler than Saturday but clear all day. We spent the morning and early afternoon in the house, doing chores. Our neighbors were having their gutters cleaned -- the people who do yard work, landscaping, and outside repairs all seem to be working as usual, since social distancing is pretty easy in those areas -- so we had them do ours too. In the afternoon we met my parents in a nearby neighborhood with lots of cherry blossoms and walked several feet apart. There are still lots of daffodils and violets and we saw a herd of deer racing through people's yards under the trees. 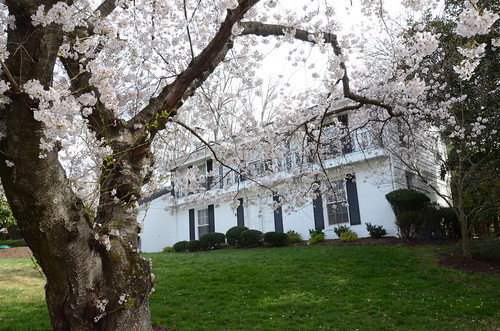 We watched this week's Batwoman, which I liked -- I'm so sick of Kate letting herself be manipulated by Alice -- then the new Westworld, which I liked even better, though I really don't want this season to come down to Dolores vs. Maeve, they have far more in common than either of them does with their captors/rapists/would-be-murderers and I want them to end up working together (if they put William where we saw him at the end of last season, so much the better). Now we're watching specials on the Royal Family and the Channel Islands during WWII on public television.
Collapse