It rained nearly all day Monday so it was very quiet around here. I scanned a bunch more photos, started posting 15-year-anniversary pictures from our 2005 trip to the U.K. on Facebook, swapped a bunch of emails with a friend in locked-down London, and chatted with older son, who knew Seattle was about to be locked down and was trying to figure out whether he could get done everything in the city fast enough to go stay with a friend in the suburbs instead of his apartment building with many fingers on elevator buttons. I took a short walk in the drizzle, and in the late afternoon, we took a ride to a nearby park to look at the trees in bloom.

Laundry got folded, we had Indian food for dinner. My college roommate called with the scary news that she's in quarantine because of many positive COVID tests in her office building -- she's near the epicenter of the New York epidemic -- then my sister called, who's also pretty close to the outbreak, and she and I caught up for a while (she's not unhappy to be at home with her daughters). Afterward we watched the second episode of The Plot Against America, better than the first, and some more Jessica Jones, so violent and does the supersoldier drug plot ever meet the Kilgrave Experiments plot? Piglets from the National Colonial Farm: 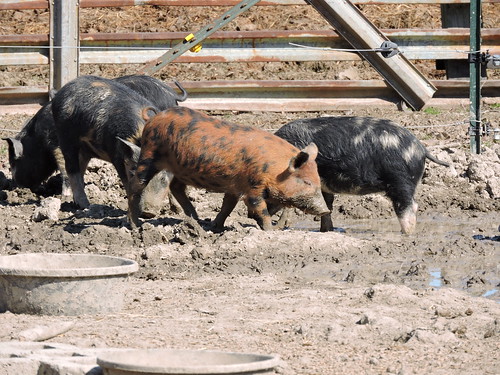