It rained pretty much from dawn till dusk and was very dark outside. I got some scanning done and some chores done, but a lot of my day was taken up with threatening my computer, which has taken to clicking on things I never clicked on even when the mouse is unplugged, and trying to figure out what kind of animal got in through the exhaust vent we just had repainted and I don't know what the guys who did it might have done to make it more accessible to animals (the scrabbling in the vents has stopped, which I deeply hope means the animal got out and not that it's still in there too weak to move).

So I was in a crappy mood till late afternoon, when I did two Pokemon raids from the car in the rain with a friend from high school and her kids. For dinner, we ordered from the Cheesecake Factory to get the dessert part of Paul's birthday. Now I'm very full and have watched The Masked Singer, which somehow always improves my mood greatly, followed by LEGO Masters, which is guaranteed to have a woman in the final, and Stumptown, in which I hope they're not setting up a competition over a boy and which had a great ending. Some attempts at artsy cherry blossom photos and neighborhood art: 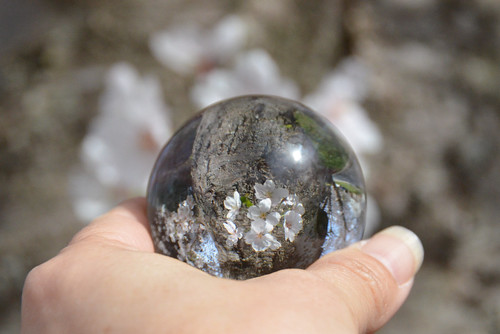